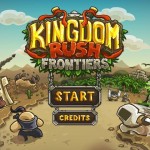 Ah, with the release of Kingdom Rush Frontiers a few weeks ago, I’ve been impressed at how much fans of the series enjoyed it. Admittedly the KR series is one of my favorite games that I’ve provided character voice work for. I plan on making a post talking about some of that in the near future and possibly even bringing in some of the geniuses at Ironhide Game Studio to talk about how they made such a great tower defense title that causes your children’s cries for your parenting to go unanswered.

In fact, as a heads up for folks who squander their precious time reading this blog I have it on good authority that an expansion for Kingdom Rush Frontiers may be in the works. That authority is the session that I just wrapped providing voice work for some fantastic new characters in the KR universe. I’ll leave it at that.

Oh wait, was that a hint?