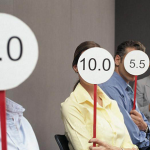 I’ll wait while you try this. No, go ahead and think of them right now before reading the rest of this. These three things can be anything that you believe you are exceptionally good at doing.

Did you come up with three?

Are you reading this before you did? Shame on you.

Now let’s build on this (or take away from it depending on how it goes). Next, try to avoid subjective judgments and only add items to your list that you demonstrably prove your exceptional ability in. We would need some sort of benchmark that clearly defines you in the accomplished upper percentile ranking of said ability. For example, if you are a really good basketball player, your stats would indisputably prove your ability and ranking when compared relatively to other basketball players (and for the sake of the largest sample possible, those who do not consider themselves basketball players.) Quantitatively, the numbers don’t lie, right?

Go ahead and reexamine your list. Did you make any changes to the three most gooder-able-est abilities/talents that you have when asked to only include those that you can “prove”?

Now since you’re taking a break from being and doing the totally awesomes and still reading  let’s say your list includes guitar playing (or any musical instrument). You are quite certain that you are indeed a geetar hero/heroine. How do you prove this belief? Is it a relative comparison to other guitar players? Is it because your aunt Matilda says so? Is it because you are in a band who has quadruple adamantium albums and your face smeared all over posters in the cluttered bedrooms of fanstruck teenagers? Does any combination of these facts assert that you are the in fact the unholy guitarmageddon?

First, this whole rant is not intended to be the proponent of ranking any skillset or talent that you have. If you do something, anything, do it because you enjoy doing it. This enjoyment should trump the idea of if you can actually do it well or not. That is, unless doing it well is what you in fact enjoy, in which case I suppose that’s valid too.  But I’m getting away from the main idea of this post, which is simply an exploration of our subjective opinions of what “talent” is. Particularly in the creative realm.

Back to the guitar player example. Anywhere on the interwebs you can find various netizens senselessly arguing over who the best band or guitar player is.

“Luke Lightning is the best! He can play so fast!”

“Rita Rigatoni plays with so much emotion and feeling that she’s the greatest guitar player EVAR.”

Yeah we’ve all seen these sharp witted assertions and counter assertions. Creatively speaking, when discussing or reviewing and evaluating any medium there are so many elements to consider as to why we like what we like. Technical skill. Emotional impact. Legacy. Relative association. Knowledge base. Some are certainly subjective, others are tangibly measurable. One doesn’t necessarily outweigh another objectively. They only matter to an individual when that individual interprets them through the lens of their own feelings, experiences and prejudices, making the art being interpreted a profoundly personal experience. That is what art is in my belief. A language used to convey the human experience and evoke emotion for good or ill. Say you hate it. Say you love it. Either way validates the creation of that art.

Yeah, that’s a hard stance to take in reality. I know. I do my best to listen to feedback and people’s own personal experiences with my own art. That ain’t to say that I don’t beam with valid pride when someone loves something I’ve done or shrink with a burning doubt when someone despises something I’ve created. I am human. However, I try not to let that feedback change what it is that I want to create too significantly. I still want to create art that is an expression of my human experience and my platform of perception, while acknowledging how that perception affects other people. This is especially true if what you create sustains you financially. Certainly you want people to be happy with it so that you can continue to have a viable source of income. Of course one can argue that changing artistic expression because of external feedback is in and of itself is conducive to creation, since that change has been brought about by human experience and therefore valid art.  I suppose then, let’s just say not to be disingenuous with what you create.

I think I’ll go eat some ice cream. Total confession time too: I rarely read reviews of my audiobook narration work. It’s a bizarre quirk in my brain that wants me to not really read anything about what folks are saying. Some stuff reaches my ears (like when I win an award or a fan or author writes me directly) but I try not to go out of my way to absorb what folks say. Yeah, you know the ever present “What if they hate me? What if they love me?” I probably should, but I admit that there is a fear in me that I’ll become too absorbed in what people think. One of these days I’ll grow enough to get around to reading those reviews. After all, gotta have a benchmark somewhere right?

Well, what do you think about all of this? I mean, you could have gone out and been totally awesome but you sat here and read this. What say you?

Oh and your list of three things? Remember that. One of those things just may change your life.